The Gold Coast Suns Academy have once again defeated the Brisbane Lions by 7 points, claiming the series 2-0. Both Rhys Nicholls & Aiden Fyfe led from the front again for the Suns Academy being named in their sides best players. A big congratulations to all boys who have featured in the series, who now will return to their QAFL clubs.

Swan Districts Midfielder Frank Anderson has returned after the bye collecting 17 disposals and 5 tackles in his sides 20 point defeat to South Fremantle, while Peel Thunder’s James Sturrock had 14 possessions in his sides loss to Subiaco.

A top of the table clash in the QAFL over the weekend with Palm Beach Currumbin taking on Broadbeach. Max Spencer was judged best on ground by his coaches as they narrowly lost by 1 point to Broadbeach at Salk Oval. Meanwhile, Daniel Charlesworth was named in Surfers Paradise Demons best players in their loss to Mt Gravatt.

North Shore Bombers once again proved to strong for their opposition winning by 41 points, Ryan Hebron was named in his sides best players with 2 goals and now sits in equal 3rd for goals kicked in the competition.

In the Hart Sapphire Series, Maddie Hinchliffe’s Brisbane North Cougars have defeated the Carina Leagues Club Tigers 60-34. Playing through the mid-court Maddie was able to dominate the game and provide her side with key opportunities to win the game. 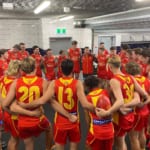 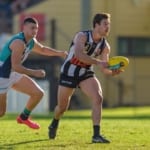