Swan Districts Midfielder Frank Anderson had a strong performance in his side’s 35 point loss to East Fremantle collecting 18 disposals and 9 tackles. The loss over the weekend diminishes their finals chances this year, with now just 2 games left for the fixture season.

In Queensland, Aiden Fyfe  was named best on ground in Broadbeach’s big win over Wilston Grange. Playing off half-back and through the wing, Fyfe was able to help his side rebound the football from their back half. Ryan Gilmore was able to add 2 goals to Broadbeach’s tally and Kwaby Boakye was also named in their best players. Rhys Nicholls provided plenty of run and carry from Labrador’s defensive end but unfortunately wasn’t enough as the side lost by 26 points to Maroochydore.

Ryan Hebron has continued his strong form kicking 4 goals for the North Shore Bombers in their 41 point win, taking his season total to 22 goals from 7 games. Jake Bartholomaeus has been named Best on Ground for the 4th time this year in just his 5th game for Sydney University, they proved too strong for their opponents on the weekend winning by 70 points.

It was Brisbane North Cougars proving too strong again in the Hart Sapphire Series, with Maddie Hinchliffe assisting her side to victory playing through mid-court. 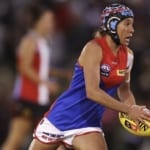 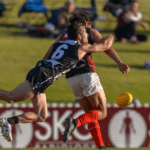