In the QAFL, it was Grand Final week with Broadbeach taking on Morningside. After a hard fought battle, Morningside came out on top winners by 9 points. For Broadbeach Aiden Fyfe who played across half back was named in his sides best players, Ryan Gilmore also kicked a goal for his side playing up forward.

The Colts Grand Final also featured Broadbeach taking on Palm Beach, it was a similar story to the seniors with Broadbeach going down by 20 points which featured both Tom Hofert and Ryan Pickering.

During the second week of finals for AFL Sydney, Ryan Hebron’s North Shore Bombers went down by 9 points in their Semi-Final. Jake Bartholomaeus was amongst Sydney University’s best players as they cruised to a 43 point victory, setting up a Preliminary Final clash with North Shore Bombers.

Maddie Hinchliffe and Brisbane North Cougars have now won 6 out of 6 games winning 51-44 against Wildcats. 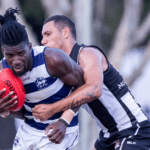 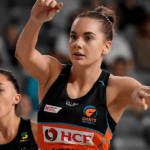 Inside the Hub with Kiera Austin
Scroll to top